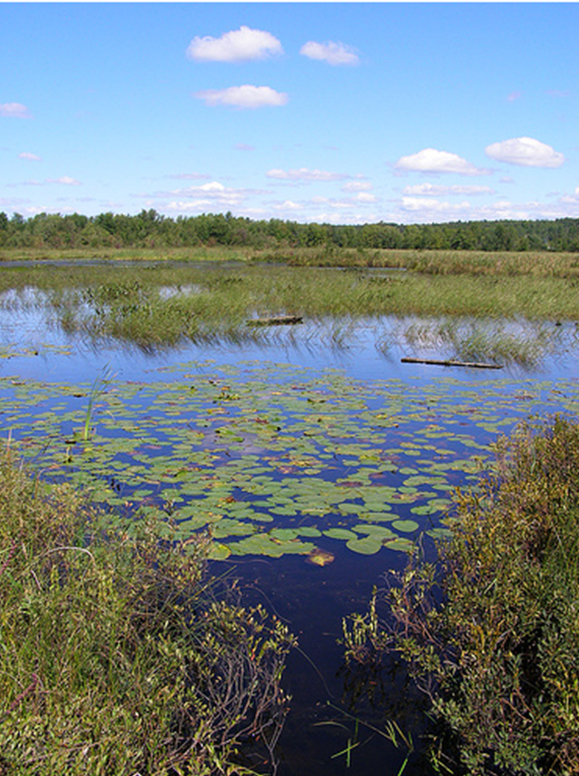 Wetlands are often compared to kidneys. This is an apt comparison, since wetlands are areas that filter and clean water before it continues its course through the hydrologic network. As well, they are our best defense against flooding, given their capacity to absorb flood waters. Like a human that has lost some or all of the functionality of their kidneys, over the years, the Lake Memphremagog watershed has lost a large part of its ability to filter and hold back water. In fact, as in many other parts of Québec, shorelines have been walled in, small ponds and humid areas have been filled in, and swamps have been drained. Worse, this trend has not slowed, in fact, it has accelerated. Once we come to understand the critical importance of wetlands to the health of the Lake Memphremagog watershed, not only will we start protecting those that remain, but we will also work to restore those we have lost, especially those at the outlets of the lake’s tributaries.

What is a wetland?

A wetland is an ecosystem whose basic structure is an area where the water table is near or even above the surface. The soil is saturated, or flooded for a sufficient part of the year to influence the nature of the soil and the vegetation contained therein. We can recognize a wetland by the presence of hygrophilous (water loving) plants, plants that tolerate varying periods of flooding. Resembling more an aquatic environment during periods of flooding, a wetland becomes more like a terrestrial area during periods of drought. There are 5 principal types of wetlands: peat bogs (whether peat producing or not), shorelines, marshes, swamps and ponds.


What is the situation of wetlands in the Lake Memphremagog watershed?

As with other regions of the province, the Lake Memphremagog watershed has already lost a large proportion of its wetlands. Luckily, several high value wetlands still exist. At the scale of the MRC Memphremagog territory, wetlands represent only 1% of the land. Wherever the lake’s shoreline is shallowly sloped, it is a wetland. We are also familiar with the Cherry River marsh, which filters and cleans Cherry River’s water before it flows into the lake. What we are less familiar with are the myriad small wetlands scattered over the watershed, which are not only of great importance to the maintenance of biodiversity of the ecosystem, but also act as sponges, storing water during periods of heavy rain, thus protecting our structures from flooding. These wetlands are critically endangered in many regions of Québec. It is estimated that more than 4,000 hectares (ha) of these wetlands have been lost or degraded in Southern Québec in the last 40 years. For example, the St-Lawrence lowlands have lost more than 45% of their wetlands as a result of draining for agricultural or residential development purposes.


Why are wetlands so important?

Wetlands provide a number of goods and services to society, notably the following:

In Québec, 271 of the 638 vertebrate species need wetlands for shelter, food or reproduction. Many terrestrial and aquatic species require wetlands for part of their lifespan. More than one third of the birds in Canada, including wildfowl, need wetlands. For migrating birds, the existence and conservation of wetlands at the continental level is a matter of sheer survival. As well, many fish species use wetlands for feeding and spawning. For example, floodplains in spring are used by pike, which find the conditions favourable for spawning. As well, frogs and toads use wetlands to lay their eggs. It is the same for all turtle species and most salamanders. We also know that all species of snakes and serpents need humidity in a part of their habitat.

As with the human body that cannot survive without a kidney, so too a watershed needs its wetlands. It is the plants in the wetland that filter the water that we use every day. First off, the plants hold back material suspended in the water column. Research has shown that wetlands can capture up to 70% of the sediments carried by runoff. Next, the plants take up nutrients such as phosphorus. to support their growth. Research indicates that up to 92% of the phosphorus and 95% of the nitrogen in the water can be eliminated as the water flows through a wetland. Finally, wetland plants can absorb and store in their roots many pollutants, such as pesticide residues and heavy metals. The filtration capacity of wetlands is such that a few dozen hectares of wetland possess the same filtration and purification capacity as a treatment plant costing several million dollars. In fact, wetlands are so effective that today, we model treatment plant designs on them.

Wetlands act as giant sponges, regulating the watershed’s hydrology. When it rains, wetlands capture water, store it and release it very slowly over a long time period, weeks or even months. They are an important contributor to the recharging of aquifers. This mechanism thus moderates flooding, allows the ecosystem to survive drought and ensures that our wells do not run dry.

Wetlands: a barrier against shoreline erosion

The vegetation on wetland shorelines helps protect the shore against erosion during spring runoff and heavy rainfall. The plants’ roots anchor the soil in place and absorb the energy from wind and waves.

Wetlands have the capacity to absorb and store carbon dioxide from the atmosphere.

Wetlands are also peaceful areas suitable for a variety of outdoor activities such as fishing, hunting, trapping and birdwatching. These activities are worth millions of dollars annually in food and lodging, and other local spending, as well as in permits, access fees, guides and equipment, etc.


Are the wetlands of the Lake Memphremagog watershed adequately protected?

Among aquatic ecosystems to be protected, wetlands top the list, given their important roles in the maintenance of water quality and biodiversity. In Québec, all wetlands of 5 hectares or more are theoretically protected by the Law on Wildlife Habitats. Smaller wetlands are protected by municipal regulations in the watershed. We believe that this protection is, for the most part, deficient. Very few of these smaller wetlands are officially part of protected areas, even though the Memphremagog MRC officially recognizes their importance in relation to the quality of the waters of the lake’s watershed.


Non-profit Organizations to the rescue!

A number of non-profit organizations working in the Lake Memphremagog watershed are dedicated to the conservation and development of wetlands. Among this group are Appalachian Corridor and the Memphremagog Wetland Foundation.


What are the threats facing wetlands?

Each time a wetland disappears, the effectiveness of the wetlands’ kidneys diminishes. Unfortunately, it is usually only after a catastrophe that we realize their importance. Their value is incalculable and irreplaceable.

Over the years, thousands of hectares of wetlands have disappeared without us noticing. Many wetlands have been drained and used for agriculture, due to their high fertility, but the result is the loss of many wetland services.

Wetlands are often the victims of man’s “lack of space”. They are filled in to become residential lots, or marinas, or roads, or docks…. The problem is that they are situated on private property. In today’s context of growing real estate markets, and the increasing attractiveness of rural property for second residences, real estate development is a major threat to wetlands.

Pollution due to industrial, agricultural and urban activities

Industrial, agricultural and urban effluent are sources of pollution of wetlands. This includes fecal matter, metals, grease, oil, road salt, as well as pesticides and pesticide residues of all kinds. Erosion of agricultural and urban soils sends a phenomenal quantity of sediment into wetlands. All of these types of pollution can have serious repercussions on the flora and fauna of the area.

The natural equilibrium of wetlands is also threatened by the introduction of exotic invasive species. These new flora and fauna compete with indigenous species, and since they often do not have any predators, they are free to reproduce, taking over more and more space, supplanting indigenous species. Purple loosestrife and European common reed are two species that most threaten the wetlands of the Lake Memphremagog watershed.


How can we contribute to the protection of wetlands?

For more information on how you can help preserve the wetlands that remain in the Lake Memphremagog watershed, we refer you to the appropriate section of the Intervenor’s Guide.