What are exotic invasive species?

Exotic invasive species are defined as flora and fauna which are not indigenous and have the capacity to reproduce rapidly to the point of supplanting indigenous species. They take advantage of the lack of competition, predators or illnesses to invade entire ecosystems. They are very difficult to control and are able to cause significant damage to natural ecosystems, the economy and society in general. They often take root in disturbed areas, and are a good indicator of disturbance. Global warming and other environmental factors contribute to their establishment and spread. Lakes and wetlands are particularly sensitive to exotic invasives.


In what ways do exotic invasive species cause damage?

Exotic invasive species cause major damage to ecosystems and the services that they provide. When they are able to supplant a native species, all the members of the ecosystem suffer, since these animal and plant species are continually interacting. We note, for example, that a wetland invaded by the European common reed or purple loosestrife cannot support as many birds as a healthy wetland. When the supplanted species is vulnerable or threatened, the damage is generally worse, and often irreversible. According to the International Union for the Conservation of Nature (IUCN), invasive exotic species are the second greatest threat to biodiversity, after the loss of habitat. As well, ecological services provided by these habitats, such as potable water, and aquatic activities, such as fishing and swimming, can be compromised. They account for significant loss of agricultural production and lead to massive applications of pesticides or herbicides in attempts to control them. The eradication of exotic invasives and the restoration of an area is extremely costly.

Exotic invasive species can sometimes spread so thickly that they leave no room for any other species. Even without taking over completely, they sometimes modify the habitat to the point that indigenous species can no longer survive, for example by releasing certain compounds, drying out the area or reducing the level of ambient oxygen. On top of this, invasives generally have a greater capacity to take up nutrients, outcompeting native species. They can also kill off native species by predation or over browsing. As if this were not enough, exotics that invade the territory of close relatives will crossbreed with them, reducing the genetic pool via hybridization.

How did exotic invasive species arrive in the watershed of Lake Memphremagog and how do they spread?

In most cases, they were brought to the area by an amateur horticulturalist or careless boater. When we use species that have an invasive potential in our gardens or aquariums, we are also contributing to the spread of invasives. Given that exotic invasive species take advantage of disturbed environmental conditions, any disturbance of the ecosystem also contributes to their spread. Boats are preferred vectors in the movement of exotic invasive species. This is why it is so important to wash any boat that is moved from one body of water to another, especially watching out for Eurasian watermilfoil, zebra mussels, common frogbit and water chestnut.

What is the impact of global warming on the distribution of exotic invasive species?

A recent study undertaken by McGill University, financed by Ouranos, suggests that the impacts of climate change will impact the distribution of invasives in Québec. In fact, the researchers concluded that during the coming decades we are likely to see a greater spread of invasives, more species invading, and a greater ability to reproduce among some of them. These conclusions lead us to believe that prevention efforts are fully justified, and we must redouble our vigilance in the fight against invasives. The complete report, as well as a synopsis of the project, can be consulted here.


What exotic invasive species can be found in the watershed of Lake Memphremagog?

A number of exotic invasive species have managed to gain a foothold in the Lake Memphremagog watershed, causing considerable damage. At all costs, we must prevent them from spreading. We are most concerned with purple loosestrife, European common reed, Japanese knotweed and Eurasian watermilfoil.

Even though the Purple loosestrife (Lythrum salicaria) threatens the ecological balance of ecosystems, it is often cultivated on residential properties, which contributes to it’s spread. Once it gets established in a wetland, it disturbs the ecological balance, especially contributing to the drying up of humid areas. Nevertheless, the plant is very attractive, producing purple or mauve flower spikes throughout the summer.

The European common reed (Phragmites australis) is a terrestrial plant that prefers humid areas. It is commonly found on roadsides in the region, and it is threatening to invade wetlands in the watershed. Luckily, it is not common near the lake. It can be recognized by long stalks with a feathery top. There is an indigenous species of this family, but the European genotype is very invasive. The indigenous species has almost completely disappeared from the province of Québec. 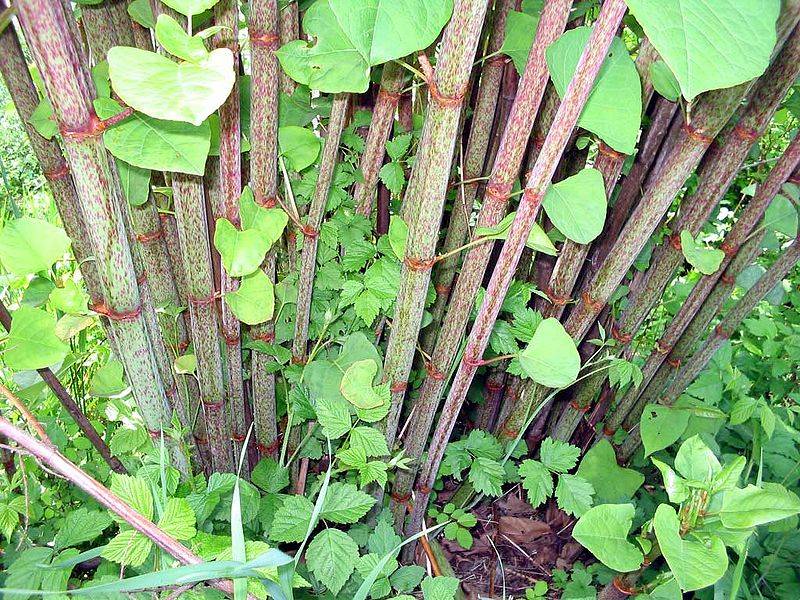 Japanese knotweed (Fallopia japonica) is a terrestrial plant which rapidly takes over areas of disturbed soil. According to the IUCN, it is one of the hundred most worrisome invasive species. It is already well established in the Lake Memphremagog watershed, and threatens to spread to waterways and wetlands. It is easily recognized by it’s reddish hollow stalks and it’s resemblance to bamboo. It is very hard to eradicate.

The sap of this plant contain toxins that are activated by light, and cause skin lesions that look like burns. This plant should never be touched by bare hands. It should not be moved, transplanted or propagated by seed. Giant hogweed (Heracleum mantegazzianum), also known as cartwheel flower, giant cow parsnip, hogsbane or giant cow parsley, can rapidly colonize various areas by harming the growth of other plants. It establishes itself along waterways, ditches and railways, among others. This shrub can reach 5 metres in height.

This plant is often mistaken for common cow parsnip (Heracleum lanatum), which is indigenous and non-toxic. It is important then to properly identify the plant when we believe that we have seen giant hogweed. In Magog, it is classed as a noxious weed that must be reported, but it’s presence must also be reported in other municipalities. 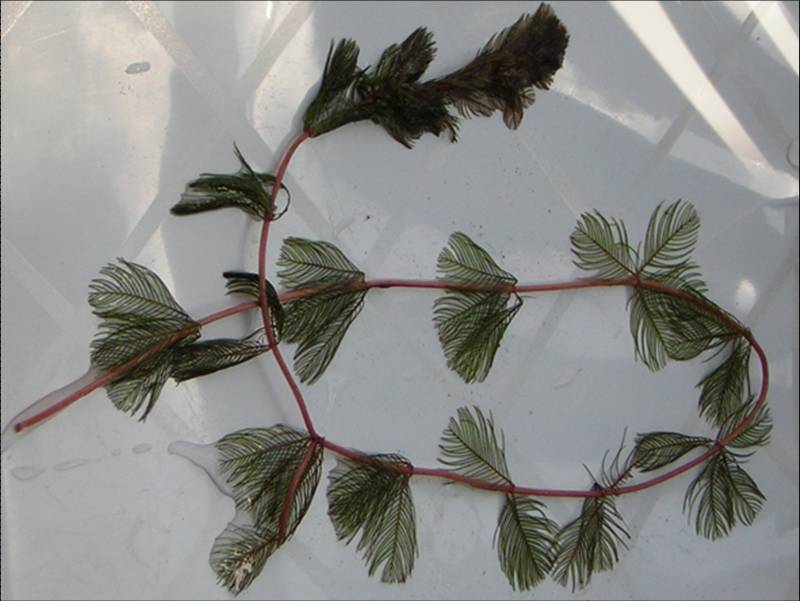 Eurasian watermilfoil (Myriophyllum spicatum) is an invasive aquatic plant that is already well established in Lake Memphremagog and elsewhere in the watershed. It grows in very dense colonies, reducing the quality of swimming and hindering navigation. Its stalk resembles long coils, and the leaves look like fine feathers. A single piece of this plant is sufficient to start a whole new colony.

The zebra mussel (Dreissena polymorpha) is a small mollusc that has already caused a great deal of damage to the ecosystems of the great lakes and the St-Laurence river. When it establishes itself on a water intake pipe, it can proliferate to the point of completely blocking its opening, compromising the flow of water. As well, it excretes substances that give drinking water a bad taste, and are responsible

for lethal botulism epidemics in wild animals. It can be recognized by it’s brown shell with white stripes.

What are the exotic invasive species that are knocking at our door?

There are a number of exotic invasive species that are present in areas near Lake Memphremagog’s watershed, but have not yet reached us. We need to be extremely vigilant, and ensure that they do not reach us, for, as we have seen, they can cause great environmental damage. Their eradication is extremely difficult once they are established. Species to especially watch out for include thorny water flea, rusty crayfish, water chestnut and dydimo.

The thorny water flea (Bythotrephes longimanus) and the fishhook water flea (Cercopagis pengoi) are small crustaceans of about 1 to 1.5 cm long, and are part of the family of zooplanktons. Their principal characteristic is a long tail that makes up half of their body, armed with three pairs of sharp thorns. They are well established on Québec's borders, in Ontario, in Lake Témiscamingue, as well as in the American great lakes and Lake Champlain. See the  MFFP phamphlet (in french only) for more information.

Crayfish are a class of crustaceans that are difficult to differentiate. Certain distinctive characteristics nevertheless allow us to distinguish the rusty crayfish (Orconectes rusticus or american crayfish)from other species. The colour of its shell can vary from gray-green and dark green and brown, but it is generally possible to see a rusty red colour on each side of its carapace. In certain bodies of water, however, the red marks are absent or erased. The presence of balck bands at the end of its claws is another distinguishing feature. Experts rely on the configuration of reproductive organs for propar identification. The rusty crayfish is an invasive species that came from the United States, more precisely  from the Ohio river watershed. The first reports of rusty crayfish in Québec were noted at the beginning of the 2000s. For more information, see the MFFP web site.

Water chestnut (Trapa natans) is an aquatic invasive plant that is present in the Richelieu River watershed. It has already caused a great deal of damage to the southern part of the river’s ecosystem, in the Montérégie, and is threatening to invade Lake St-Pierre, in the Saint-Laurence river. Once established, it forms dense colonies, where nothing else can survive, and the decomposition of the organic matter that it is composed of radically reduces the concentration of oxygen in the water. It is spread by boats that have come in contact with a colony; a single plant fragment is enough to start a new colony where none existed before. 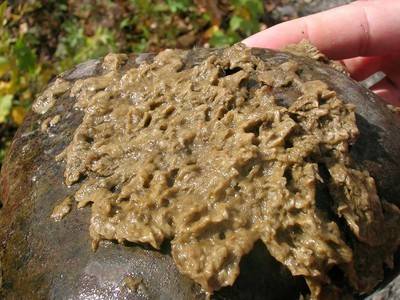 Dydimo (Dydimosphenia geminata), also called rock snot is a diatomaceous alga which only recently appeared in North America, but has already caused a lot of damage wherever it has established itself. It has been found in the Connecticut river watershed, south of Lake Memphremagog, and in the eastern part of the province of Québec. It looks like a pile of green filaments. When water levels drop, these piles dry on rocks and resemble toilet paper or parchment paper.

What other exotic invasive species should we be watching out for?

There are exotic species present in the watershed, which threaten to become invasive, even if their spread seems under control for the present. We need to be especially vigilant to avoid contributing to their spread. Most notable are the Manitoba maple, the buckthorn and the glossy buckthorn. Yellow iris is considered invasive in certain parts of the United States, especially Pennsylvania. We should avoid cultivating it on our properties, even though it does not seem to be invasive in our climate. As for the quagga mussel, which is a cousin of the zebra mussel and as problematic, it is found in the St-Laurence river, and we must absolutely ensure that it never finds it’s way to Lake Memphremagog. The washing of boats remains the best method of preventing it’s spread to our lake.