Classification of the different trophic levels of lakes with their corresponding total phosphorous, chlorophyll-a and water transparency levels.

Source: www.mddep.gouv.qc.ca/eau/rsvl/methodes.htm (in French only) 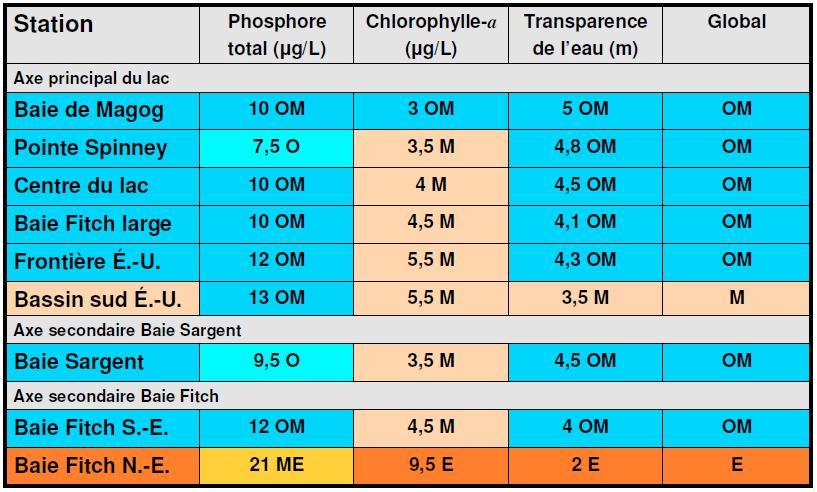 What are the components of an aquatic ecosystem?

Aquatic ecosystems are composed mainly of water, but also contain living organisms, physico-chemical components, as well as structura components. The biological elements are communities of plants, fish, macroinvertebrates and microorganisms that live there. The physico-chemical components are elements that are dissolved in the water (phosphorous, oxygen, H+ ions, etc) and matter in suspension in the water. The ecosystem structure is composed of the shoreline and the plants that grow there and the bottom sediments, which are themselves composed of organic matter and mineral particles.

To identify a disequilibrium at the level of dissolved elements and matter in suspension in the water column, we often use qualitative paremeters such as conductivity, transparency or the UV spectrum of the water. These tools allow us to quickly determine if the physico-chemistry of the water is normal or not, without spending large sums of money on detailed studies.

The UV spectrum is the signal obtained when passing ultraviolet light through a sample of water. By the shape and amplitude of the signal, we can determine if the water does or does not contain dissolved elements or matter in suspension. The UV spectrum allows some measure of the concentraton of these elements (eg. phosphorous, oxygen, pesticide residues).
See : RAPPEL 2005. technical report on the water's UV spectrum (french only)

To evaluate the quantity of dissolved elements and matter in suspension, we often rely on physico-chemical parameters: concentrations of phosphorous, oxygen, chlorophyll A, matter in suspension and H+ ions (pH). We use representative water samples from the ecosystem under study. When we suspect their presence, we can also evaluate the concentrations of pesticides and endocrine disruptors. If we want to calculate the total quantity of a certain substance being carried in a body of water, we need ot also measure the volume flow of the water, that is we mutiply the concentration of the substance by the volume of water.

Phosphorus is a dissolved element found in all aquatic ecosystems, necessary for its health, but will unbalance the ecosystem if present in too large a quantity, since it stimulates the growth of aquatic plants, algae and cyanobacteria. An abnormally high concentration of phosphorus is a symptom of accelerated eutrophication of the body of water. In northern bodies of fresh water such as Lake Memphremagog, phosphorus is the element that controls the growth of aquatic plants. It is only usable by plants in its organic form, in particular as phosphate. As phosphates are in general rapidly absorbed, their concentration is hard to measure, so we prefer to measure the total phosphorus to get a good idea of the quantity available for plant growth.
See: RAPPEL, 2005. technical report on phosphorus (french only)

Oxygen is a dissolved element necessary to all living organisms, such as fish, insects and microorganisms. when microorganisms work hard and must digest lots of organic matter (aquatc plants and feces) they breathe harder and can reduce the concentration of oxygen in the water, to the poing where there is insufficient oxygen to allow fish to survive.
See: RAPPEL 2005: technical report on oxygen (french only)

Clorophyll A is a molecule (pigment) contained in all plant cells. Its concentration is an indirect measure of the plants in the ecosystem, in particular microscopic algae in suspension in the water. The presence of large quantities of microscopic algae can be a symptom of an unbalanced ecosystem, for example superfertilization with phosphorous, which leads to accelerated eujtrophication of the body of water.
See: RAPPEL, 2005: technical report on chlorophyl A (french only)

Concentration of matter in suspension

How do we measure the biological components of an aquatic ecosystem?

Structure of the community of fish

The community of fish includes all of the fish species that live in and use a body of water, river or stream. For a given set of environmental conditions (eg.: lake vs stream, warm vs cold water), we can predict the expected structure of the community of fish found therein. The community's structure is defined as the presence or absence of a particular species as well as the relative proportions of each species found there. It is the health of the ecosystem as a habitat that determines if a particular fish species can survive there in the long run. Thus, the absence of a species of fish known to be unable to tolerate a low oxygen concentration, and which we would normally expect to be present there, is a sign of an ecosystem out of balance. As well, an excessive proportion of herbivorous species versus fish eating species is also indicative of an unbalanced ecosystem.
See: RAPPEL 2005: technical report on fish (in French only) and RAPPEL, 2008: Internet page on fish (in French only)

Structure of the community of macroinvertebrates

How do we measure structural component quantities?

To measure the quantities of the various structural components, we use visual parameters such as the thickness of sediments and the extent of plant cover. The alteration of the structural components reduces the uses to which the ecosystem can be put, such as the degradation of swimming areas and a reduction in the potential for aquatic activities.

Sediments are the solid particles that are deposited on the bottom of a body of water, river or stream. They are the end result of erosion. Their thickness is thus a good measure of the amount of erosion in the watershed. When present in excessive quantities near the shoreline, they encourage the proliferation of aquatic plants, as well as limiting usages, by the degradation of swimming areas and the reduced potential for aquatic activities.
See: RAPPEL 2005: technical report on sediments (in French only)

The extent of aquatic plant cover

Integrity of the shoreline