Forests, or forest cover, is the vegetation that naturally covers the territory when it has not been occupied or used for anthropic activities. It is the best possible regulator of the watershed's hydrology. It is also the habitat of a wide variety of flora and fauna, some of which are at risk of disappearance. As well, it regulates the cycles of various elements (nitrogen, phosphorus, potassium, sulfur, etc.) and is a huge carbon sink. In a study of Eastern Townships lakes, Dr. Yves Prairie of GRIL (a limnological research group) concluded that the largest factor harming lakes and contributing to phosphorus loading is deforestation. Forest cover is at the basis of ecotourism, which encourages low impact 'green' activities, which are becoming more and more popular.

How do forests regulate the watershed's hydrology?

What is the watershed's hydrology?

During snow melt and rain events, waterways respond by increasing water flow. These variations in water flow are obviously influenced by the amount of snow on the ground and how long it takes to melt, as well as the intensity and duration of rain events.. However, the retention of some of the water by vegetation and the soil, as well as evaporation also influence water flow. 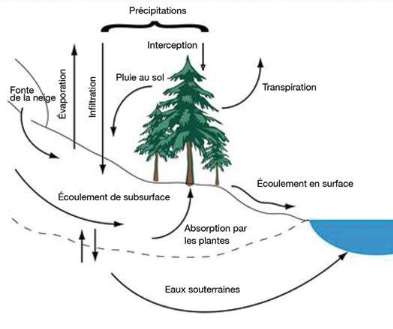 Capture and evapotranspiration of water by plants

Forest cover promotes evapotranspiration, rather than allowing surface runoff to rapidly reach waterways. In fact, plants need a great deal of water for their metabolism. They capture some of the rainwater before it reaches the ground and evaporate it back into the atmosphere. It is said that the forest cover vegetation captures 25% of the rainwater; the rest percolates into the soil rather than running off on the surface. Thus, forest cover moderates the impact of heavy rain events. Note that experts predict increasing frequency and intensity of rain events in coming years.

Percolation into the soil

By its very nature, forest soil allows water to percolate into the soil and recharge aquifers instead of directing the water to the nearest water course. Note that water flows faster on the surface than within the soil.

Protection against the impact of rain drops

Vegetative cover is the best way to protect soil from the impact of raindrops causing the bursting of soil particles and their transport to the hydrologic system (erosion).

What benefits does the forest cover's regulation of the hydrological cycle bring us?

Reduction in the transport of pollutants towards aquatic ecosystems

Surface water runoff makes its way to water courses via the shortest route, using ditches and storm drains or flowing across ashphalt, concrete, roofs and lawns. As such, runoff transports sediments and other contaminants found on the surface and in drainage systems. During rain events, water entering rivers is particularly loaded with sediment and pollutants due to erosion in urbanized regions. These sediments notably carry phosphorus, reponsible for the presence of cyanobacteria in our waterways. As a consequence, the lake receives more soil particles, thus causing silting and accelerated eutrophication.

Thanks to the phenomena of capture, evapotranspiration and water percolation into the soil, runoff into waterways can be significantly reduced, resulting in reduced peak water flow (speed and volume) and its spread over a longer period of time. Sudden and intense flooding is thus moderated.

Reduction in the risk of flooding

If the forest cover is altered, flooding can occur in places where it never did in the past.

Maintenance of the stability of water courses

If peak water flows and speeds increase, then the shores of water courses come under increased pressure, and respond with a variety of adjustments, such as erosion, enlargement of the water course, sedimentation, etc.

Maintenance of the stability of storm water infrastructure

Increases in peak water flows can result in the necessity of rebuilding a whole series of bridges and culverts that were not designed to accomodate the flow of water over a certain volume.

By allowing greater infiltration of water into the soil, forest cover permits the recharging of aquifers, which thus continue to supply water to water courses even when there is no rain for an extended period of time. Small water courses are assured of a permanent flow of water rather than an intermittent one, allowing the water course to maintain its role as habitat.

What are the threats to the forest cover?

Forested areas face a number of threats; they are coveted for various uses, such as residential development, urbanization, recreational activities and forestry practices. It is incumbent on us to manage these activities in a respectful manner in order to maintain a healthy ecosystem. The use of forested areas, be it for forestry exploitation, hunting, open air activities or just to appreciate the beauty of the natural landscapes, is intimately related to the economic development of local communities. They can diversify their revenue sources by a more sustainable use of these various resources that contribute to the quality of life of the residents. Uncontrolled real estate development is the principal threat to the forest cover. Changes to the forest cover are often associated with the urbanization of the territory, where hard, impermeable surfaces are created (driveways, roads, houses, public buildings, commercial buildings). These surfaces exacerbate problems caused by modifying the forest cover. Intense deforestation caused by irresponsible forestry practices is another threat to the forest cover, especially on slopes greater than 15%.

The forest cover: an irreplaceable habitat

The forest cover provides appropriate habitat for a variety of indigenous flora and fauna and ensures their inter-connection. The forested areas in the region contain a great ecological richness. A large number of flora and fauna species, including a number that are threatened or vulnerable, depend entirely or in part on forested areas. As an example, more than 90% of threatened north-american avian species depend on these habitats; 12% of flora that are threatened or at risk in Québec are found there. As well, certain mammals, such as the lynx, cougar and eastern wolf, require large tracts of unbroken forest to survive. The construction of roads and homes creates barriers to the free movement of animals. Local populations find themselves isolated, and can no longer maintain appropriate genetic variability. In the long term, the fragmentation of these habitats jeopardizes the survival of these populations, as most species need adequate genetic mixing to remain viable. Forests are also where hunting activities take place.

All of the organic matter found in forests represents a huge reservoir of carbon, most notably in the wood of the trees and in the organic soil. Forests are thus the best way to protect against climate change. This is an important issue in the context of the changes we are currently experiencing in the climate.

What forests must we pay particular attention to?

There are important tracts of unbroken forest and exceptional forest ecosystems in the Lake Memphremagog watershed, as defined by the ministry of forestry, wildlife and parks (MFFP). There are rare forests, forests that harbour threatened or vulnerable species or species likely to become so. There are currently  67 exceptional forest ecosystems on private land in the Eastern Townships. As well, more than half of them (42) harbour threatened or vulnerable plants. 17 are rare ecosystems and 8 are defined as ancient. These forests cover a total of 2,161 hectares. It is crucial that municipal by-laws and the MRC's urban plan provide them with a protected status.

An ancient forest is a forest ecosystem where the dominant trees have reached or surpassed maturity. These forests possess a particular dynamic. They can be recognized by dead or dying trees of various sizes as well as tree trunks in various degrees of decomposition on the ground. To all appearances, they have not been affected by human activity over several decades.

Refuge forests are characterized by the presence of one or more plant species that are threatened, vulnerable or likely to become so, generally containing significant populations of at least one of these plants. A threatened species is one at risk of disappearance, and a vulnerable species is one whose situation is tenuous, even if their disappearance is not imminent.

AMVFPE, 2002. Protection and improvement plan for private forests in the Eastern Townships (in French only)

AFCE, 2007. Map of exceptional forest ecosystems in the Eastern Townships (in French only)