Québec’s freshwater bodies contain 3 types of algae: cyanobacteria, diatomaceous algae and green algae. These microscopic and generally invisible organisms can nevertheless proliferate quickly under certain conditions, resulting in the appearance of masses of algae visible to the naked eye.

In the case of green algae, certain species can proliferate and form filamentous masses, thus the name filamentous green algae, which are being seen more and more frequently by shoreline residents of Lake Memphremagog.

What are filamentous green algae?

Filamentous green algae are a category of green algae, a type of aquatic vegetation naturally present in Québec’s waterways. They are tiny organisms, often unicellular, and a part of the natural ecosystem of all aquatic environments. As with terrestrial vegetation, these algae photosynthesize and need various nutrients to grow. If a body of water contains a super abundance of nutrients, the algae proliferate exponentially, leading to masses of macroscopic (visible to the naked eye) algae (RAPPEL, s.d.). These masses of green algae (not to be confused with cyanobacteria blooms) are not dangerous in and of themselves but can disturb the balance of the area and have diverse consequences on the local ecosystem. They generally attach themselves to the substrate (rocks, logs, and other submerged surfaces, but can sometimes detach from the bottom and create floating masses (Clemson University, s.d.). 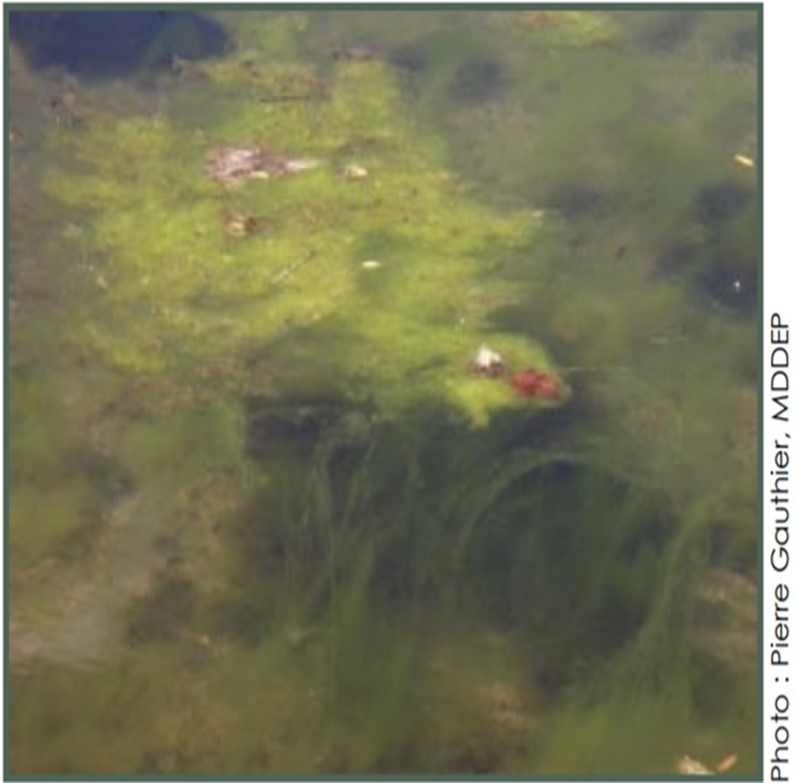 Filamentous green algae on the surface and in the water column (Lake Michel, Saint-David-De-Falardeau,
July 2004)

How do they develop?

Filamentous green algae photosynthesize to ensure growth. Thus, they use the sun’s rays and feed on various nutrients (phosphorus, nitrogen, etc.) to develop. So, if there is an abnormally high level of nutrients in the water, these algae begin to proliferate uncontrollably, creating an unbalanced situation. The surplus nutrients come from runoff from agricultural land and/or leakage from septic systems (College of Agricultural, Consumer and Environmental Sciences [Rossana Sallenave], 2017). The algae may appear in a lake early in the spring, as the water temperature warms, and develop throughout the summer.

As well, this type of algae prefers warm, shallow stagnant water with little current (MELCC [Sylvie Blais], 2008). Thus, they are generally found near the shores of lakes, both anchored to the bottom and as floating masses. 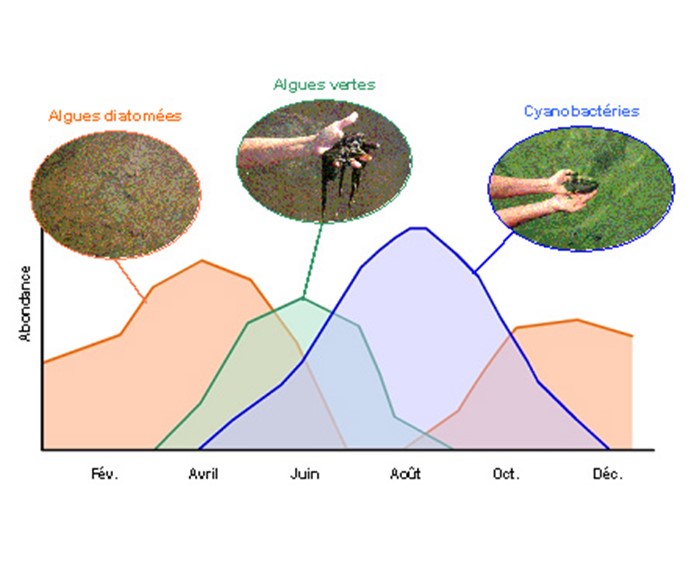 How to distinguish filamentous green algae from cyanobacteria blooms

At first glance, masses of filamentous algae and cyanobacteria blooms may appear very similar. In general, filamentous green algae create thick masses that may resemble wet strands of wool or cotton or muddy streaks, but they may have a more homogeneous appearance like a cyanobacteria bloom. In this case, a simple test will allow us to quickly determine the nature of the floating mass: plunge a stick into the mass and lift it out of the water. If long filaments hang from both sides of the stick, they are filamentous green algae. If only some pieces remain stuck to the stick and the clumps fall back into the water, it is without a doubt a cyanobacteria bloom (MELCC [Sylvie Blais], 2008). Do filamentous green algae pose a threat to humans?

When it comes to the health of swimmers and shoreline residents, prudence must be exercised. Even though the algae are not toxic or dangerous in and of themselves, the carpets of algae can nevertheless host a variety of harmful bacteria. As well, it is important to properly distinguish filamentous green algae from cyanobacteria blooms, as these latter can release toxins that are dangerous to human health. If one observes masses of algae, one should avoid contact with them and use adequate protection equipment if their manipulation is necessary (Clemson University, s.d.).

Are filamentous green algae dangerous for the environment?

Green algae are a natural part of a normal lake ecosystem. Nevertheless, in case of excessive proliferation, they can be a problem for the ecosystem which supports them. An overabundance of algae can unbalance the natural equilibrium of the area: large floating masses block the sun’s rays from penetrating the water, modifying the normal temperature, and depriving other aquatic plants of sunlight (CRE Laurentides, 2019).

Another problem to consider is their decomposition. When they die, large masses of filamentous green algae represent an enormous quantity of organic material to decompose, leading to a large demand for oxygen from the decomposers. This results in a lowering of the dissolved oxygen concentration available for other species that depend on it. This impoverished environment has more difficulty supporting aquatic fauna (CRE Laurentides, 2019).

What are the socio-economic impacts of the development of masses of filamentous green algae?

An overabundance of filamentous green algae can also become a problem for human activities. In fact, these masses of algae can have a serious impact on recreotouristic activities, limiting swimming and other water sports (College of Agricultural, Consumer and Environmental Sciences [Rossana Sallenave], 2017). As well, they can impart a disagreeable odor and taste to the water, block drinking water intake pipes and filters and increase the cost of treating drinking water (CRE Laurentides, 2019). Remember that Lake Memphremagog is a drinking water source for more than 175,000 people.

How can we prevent the proliferation of filamentous green algae?

The best way to prevent their development is to limit the excessive intake of nutrients into aquatic environment. This can be done by addressing the principal sources of runoff loaded with nutrients, notably urban and agricultural runoff and leakage from septic systems (College of Agricultural, Consumer and Environmental Sciences [Rossana Sallenave], 2017).

Urban runoff comes from diverse sources. One of the major ones is the fertilization of lawns near waterways. In fact, lawn and flower bed fertilizers can be carried by rainwater and flow all the way to the water. Luckily, a number of proper practices exist to prevent this type of situation.

In agricultural environments, several strategies can be implemented to avoid the loss of nutrients on the land (management of fertilizer spreading, limiting the access of livestock to waterways, etc.). For more information on the best farming practices to adopt, see our page on agricultural best practices.

Septic systems that treat domestic wastewater are loaded with nutrients. It is thus critical to regularly maintain these systems to avoid leakage of nutrients into waterways.

In general, a good way to prevent erosion and the intake of nutrients into the lake is to maintain a sufficiently large and dense shoreline buffer zone, composed of several vegetative strata.

How can we control these masses of filamentous green algae?

Once a mass of algae appears, it is difficult to eliminate. Some control methods exist, but their effect is generally short-term:

In cases where these masses are problematic, it is possible to manually remove them using a rake or net (College of Agricultural, Consumer and Environmental Sciences [Rossana Sallenave], 2017). Once collected, the algae must be dried then disposed of. It is crucial to not leave masses of them on the shoreline, to ensure that they do not re-enter the water and create additional problems when they decompose. As well, it is recommended to avoid directly handling them. Even though they are not dangerous themselves, they can contain a variety of harmful substances.

There is a technology that shows promise: the floating wetland. This consists in putting in place a floating garden of native plants. The principle is simple: the plants’ roots, which develop in the water, capture excess nutrients, thus reducing their concentration in the water (Clemson University, s.d.). However, this technique is costly, and is more effective in small bodies of water.

Finally, the use of algicides in not recommended. If this solution seems easy, its effect is only temporary and can lead to other, more serious problems: toxicity to humans and other species, changes in the water’s pH level, etc.