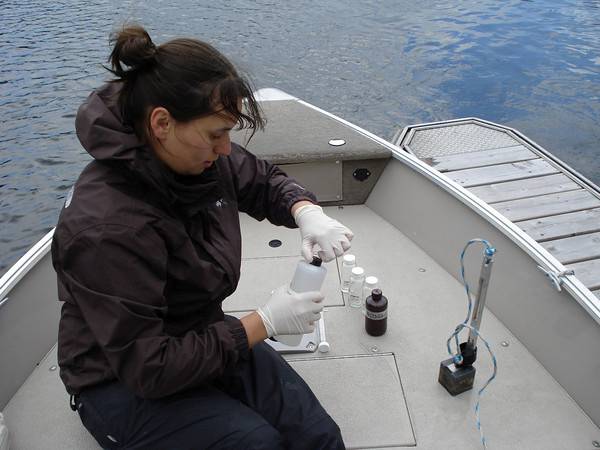 The quality of the water in the Lake Memphremagog Watershed has been the subject of several different research programmes, and has been described in numerous publications.

There are many ways by which the quality of the water in the Memphremagog ecosystem can be described, but the information obtained through numerous studies shows a very disquieting picture: Lake Memphremagog is undergoing accelerated eutrophication, or aging. Sediments and phosphorous are accumulating, chiefly from diffuse sources in the watershed from both sides of the Canada-U.S. Border.

A healthy aquatic ecosystem is important because of the many benefits it provides. Lake Memphremagog's ultimate service is as a reservoir of quality potable water for 160,000 users. It is also a prized location for bathing, boating and fishing.


What contributes to a healthy aquatic ecosystem?


First, a healthy water ecosystem is in equilibrium - its components interact to favour balance. To determine if the system retains its balance, one must gauge the quantity of each of its components, using several parameters which are easily measurable, but whose measurement is not influenced by the observer. Some observations indicate the presence or absence of a certain component; others measure its importance. These latter parameters are qualitative. However, to judge equilibrium more exactly, the best gauges are quantitative.
Whate are the components of an aquatic ecosystem?

Aquatic ecosystems are not only composed of water molecules, but also living organisms, physico-chemical components and structural components. The biological components of an aquatic ecosystem are communities of plants, fish, macroinvertebrates and microorganisms that live therein. The physico-chemical components are the dissolved elements (phosphorus, oxygen, H+ ions, etc.) and the matter suspended in the water column. The structure of the ecosystem consists of the shoreline zone, the plants that grow there and the bottom sediments, which are themselves composed of organic matter and mineral particles.

What are the qualitative physical and chemical parameters that are most often employed?

Qualitative parameters such as conductivity, transparency and UV spectrum are frequently used. The tools to measure these parameters permit a rapid gauge of the chemical and physical balance to determine if the water is normal or not, at a relatively low cost.

Conductivity is the capacity of water to allow the passage of an electric current. Pure water is a poor conductor – it is the dissolved elements and suspended particles which give it conductivity. Therefore, if conductivity is high, there is a high level of suspended and dissolved matter in the water.

The water molecule itself diminishes light that passes through it, but again it is the suspended and dissolved matter that most reduce its passage. Transparency is very easy to measure with the use of a Secchi Disk. However, this measurement is only useful as a measure of the ecosystem over time, to monitor changes in transparency.

By measuring the form and amplitude of ultra-violet light passing through a water sample, one can determine the content of dissolved and suspended matter. This technique can also determine the concentration of materials such as phosphorous, oxygen and pesticide residues.

What are the quantitative physical and chemical parameters most often employed?

Quantitative physical and chemical parameters such as the concentrations of phosphorous, oxygen, hydrogen ions (H+) and chlorophyll a, as well as suspended matter, are most often used to evaluate ecosystem health. Their concentrations are measured in water samples from the ecosystem under study. When in doubt, other tests could include concentrations of pesticide residues or hormone disrupters. To determine the total load of any substance in a body of water, the concentration measured must be multiplied by the flow volume.

The element phosphorous is present in all aquatic ecosystems and is important to its health. However, when its concentration is too high it can unbalance the ecosystem and promote the growth of aquatic plants, algae and cyanobacteria. An abnormal level of phosphorous is a symptom of accelerated eutrophication, or aging of the water body. In northern fresh water ecosystems such as Lake Memphremagog, phosphorous is the element which controls the growth of its vegetation. Phosphorous can only be used by plants in its organic form, such as phosphate. As phosphates are usually absorbed quickly and their concentration difficult to measure, preferably all forms of phosphorous are measured to obtain a better idea of the phosphorous available for aquatic plant growth.

All living organisms need oxygen. Fish, insects and microorganisms living in the water use the oxygen dissolved in water. The more organic matter digested by aquatic microorganisms, the more oxygen they require and this can lead to a reduction in the dissolved oxygen available in the water – to the point that there is not enough for fish to survive.

Concentration of Chlorophyll a

Chlorophyll a is a green molecule contained in all plants. Its measurement indirectly measures the quantity of plants in the ecosystem, especially microscopic algae suspended in the water. A high level of algae can be a symptom of disequilibrium in the ecosystem, for example by the overfertilisation of phosphorous , leading to a the accelerated eutrophisation of the body of water.

Suspended materials are a major component of the aquatic ecosystem. They may consist of fine mineral particles or vegetation particles. They can rest in suspension, neither floating nor sinking. The mineral components come from erosion of soil and are a measure of the concentration of erosion of soil in the water shed. Depending on their size, the mineral particles finish sooner or later on the bottom of the lake, where they add to the sediment. A high level of mineral particles in the water is damaging for aquatic life, but it is also a prelude to other problems when they are deposited as sediment at the bottom of the lake.


How is the quantity of the biological components measured?

Biological parameters can indicate the structure of the fish community and that of large invertebrates, as well as the concentration of fecal coliform. The biological parameters are excellent indicators of the ecosystems over the long term, because these populations live there permanently.

Structure of the fish population

This population includes all the fish species that exist in the water body. For specific environmental conditions, such as lake vs. stream or warm vs. cold water, the structure of the fish community that would normally be present can be predicted. The presence or absence of particular species and their relative proportions are indicators of the health of the ecosystem. Thus, the absence of a species that is usually present in a body of water but that is intolerant of low oxygen level is a sign of disequilibrium in the fish ecosystem. Similarly, the presence of an excessive proportion of herbivore fish compared to piscivores is also a negative symptom.

Structure of the macro-invertebrate populations

This population consists of all the species of the insects and crustaceans that live in the aquatic ecosystem. They are found attached to plant debris, under rocks and also freely moving in the water column or on the lake bottom. Like the evaluation of the fish population, the macro-invertebrates' normal proportions can be predicted and if certain species are intolerant to low oxygen levels and their proportions are not normal, the ecosystem is not in equilibrium.

How to measure the quantity of structural components?

Visual parameters are used to determine the quantities of sediments and the aquatic plant cover, of the water floor. The alteration of these structural components can limit the useful basin floor and degrade zones for swimming and other nautical activities.

Sediments are solid materials that are deposited in the bottom of the water body, resulting from the process of erosion. Their thickness provides a good indication of erosion from the surrounding land. When the quatity of sediment is excessive on the shore, aquatic plants proliferate as well as limit uses such as bathing and nautical activities.

This is a parameter that indicates the floor space used by any particular plant species. The growth of aquatic plants is controlled by the presence of nutrients, in particular excess phosphorous – leading to faster eutrophication.

Integrity of the shore margin

This is measured by the ground cover of the different elements that compose the area. Artificial elements such as stone walls and lawn are a very poor structure for the aquatic ecology. The evaluation of integrity includes the size and composition (grasses, shrubs, trees) of the shoreline vegetation.