Since the summer of 2008, a new problem has become more pronounced on Lake Memphremagog. An abnormally high number of users have had a nasty surprise: they have contracted swimmer’s itch after swimming in the lake. Swimmer’s itch is another symptom of the deterioration of the ecosystem in the Lake Memphremagog watershed. Do we really want to get used to this new problem?


What is swimmer’s itch?

Swimmer’s itch is an immune reaction on the skin caused by the bite of a tiny organism, almost invisible to the naked eye, an aquatic larva of various flatworm species by the name of cercaria.


How does one contract swimmer’s itch?

When a waterfowl which carries the parasite defecates in the water, parasites are released, and these in turn may infect any nearby snails. The snails then release the parasites into the water, where they seek out waterfowl to infect. Unfortunately, the parasite makes no distinction between humans and waterfowl. As a result, humans can be bitten by accident. 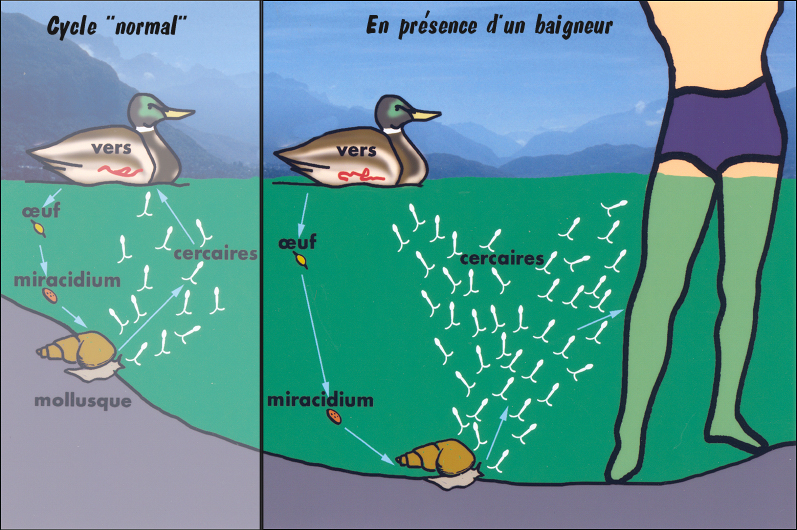 What are the symptoms of swimmer’s itch?

Swimmer’s itch causes the apparition of raised papules on the skin, which can swell and cause itching, but which disappear within a few days. Although very unpleasant, swimmer’s itch does not represent any significant danger to human health.

Example of a swimmer’s itch papule on the skin

Under what conditions will swimmer’s itch appear – where do the cercaria come from?


Where, within the Lake Memphremagog watershed, has swimmer’s itch been reported?

Since the summer of 2008, swimmer’s itch was reported at the Magog municipal beach (Plage des Cantons), the beach to the west of Magog, Drummond Point, Southière beach, Austin, Greene Bay, the Georgeville day camp and Gibraltar Point.


Should cases of swimmer’s itch be reported?

Public health authorities should be advised whenever anyone contracts swimmer’s itch. This way, they can assess the zones at risk, and establish an action plan to control the problem. To this end, public health authorities need to maintain a register of cases of infection. If you have been infected in Magog, and are a resident there, you should advise the municipality of Magog. Otherwise, advise the public health department of the government of Québec (MSSSQ).
City of Magog Environment Service: 819-843-7106
MSSSQ Info-Health line : 8-1-1

Since cercaria are naturally present in the water, but need the presence of waterfowl and snails to develop, the only way to limit their proliferation is to limit the proliferation of waterfowl and snails. Avoid attracting waterfowl by feeding them. Incidentally, Magog has regulations prohibiting the feeding of wild waterfowl. As well, the return of the lake to a lower level of productivity could reduce the population of snails, and thus reduce the incidence of swimmer’s itch.


How to reduce the risk of infection

If you have access to a shower, rinse off your skin when you are done swimming, otherwise, do not let your skin air dry and towel off vigorously.